Home › About › Environment and Communities 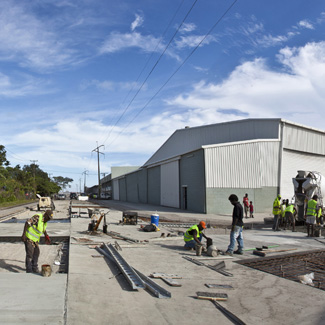 Dekenai drafts an Environmental Management Plan (EMP) that is designed to satisfy the particular requirements of each project.  The EMP identifies the obectives in minimising harm to the environment as well as enhancing it. It then explains the strategies, plans and procedures for meeting these objectives. Environmental management is the responsibility of all involved in the work, from project management staff through to site staff as well as our construction partners, suppliers and local landowners.

We believe that as a responsible corporate citizen it is essential to support worthwhile causes that have a direct impact on our community.

We have contributed to many worthwhile causes over the years, however, most recently, we have supported two very important community initiatives that impact the lives of ordinary Papua New Guineans nationwide.

Operation Open Heart raises funds annually for much needed corrective heart surgery for children and adults from all over the nation. They travel to Port Moresby after initial screening in their home provinces and undergo surgery at the Port Moresby General Hospital. A team of volunteer nurses and doctors travel from Australia, and over the course of a week provide life changing surgeries for individuals who would otherwise, not be able to afford the costs associated with seeking this surgery overseas. We are proud to be a supporter of this important cause.

Dekenai Constructions received public recognition in 2013 for participating as an inaugural sponsor of the Miss South Pacific Pageant PNG in 2011. Unlike the western concept of a beauty pageant, MSPP PNG aims to preserve our cultural heritage, and is a quest for a cultural ambassador for Papua New Guinea. The pageant places a strong emphasis on education, and one of the criteria for entering the Pageant is enrollment, or completion of a tertiary education program. Past contestants have included graduates from both local and foreign universities in the fields of Law, Finance, Political Science, Engineering, Geology, and one pilot.

The funds raised from the Pageant go towards the MSPP Scholarship Fund for Girls. In two years the fund has provided academic scholarships to over 92 bright young women facing financial hardship in tertiary institutions nationwide. Scholarships have been provided for young women studying at both public and private institutions. Recipients include young women studying teaching, nursing, medicine, pharmacy, finance, commerce, engineering, law, psychology, journalism, film and television, communications and science.

Dekenai is proud to be one of the first Pageant sponsors, supporting YalinuPoya, a University of PNG science graduate from Yalibu in the Southern Highlands Province in 2011.Yalinu was crowned first runner up.

Dekenai supports local communities and associations by assisting them to run sporting and cultural activities. Dekenai has recently supported the following organisations: